What’s the bottom line? We’re on your team and are passionate about helping you achieve your career goals, even if it means we don’t make a dime.
3.6 / 5 ( 9 votes )

Until 2002, the Big 4 were the Big 5 accounting firms. The firm Arthur Andersen was dropped from this list after the Enron scandal.

Arthur Andersen was Enron’s auditors and was implicated in falsifying financial records. 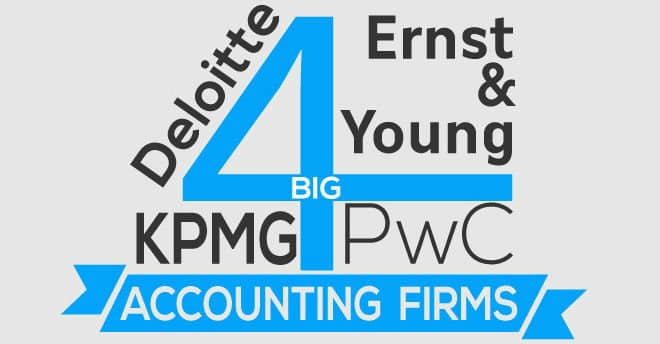 Most of these 8 firms were the result of mergers and alliances.

Later in 1989 the Big 6 became the Big 8 with the merger of Arthur Young & Co and Ernst & Whinney to form Ernst and Young; and the merger of Touche Ross and Deloitte Haskins & Sells to form Deloitte & Touche.

Learn How to become a Big 4 Accountant in 7 steps

KPMG stands for Klynveld, Peat, Marwick and Goerdeler. The several firms that made up KPMG are William Barclay Peat & Co. which merged with Marwick Mitchell and Co. and formed Peat Marwick (PM), and Klynveld joins up with McLintock to form Klynveld Main Goerdeler (KMG. KMG and PM joined up in 1987 to become KPMG.

This firm arose as a result of the merger between the original firms Arthur Young and Ernst & Ernst. Ernst and Ernst had, before the merger with Arthur Young, merged with Whinney Smith and Whinney to form Ernst & Whinney in 1979 which made it the fourth largest accountancy firm.

The international accounting firm adopted the name Deloitte Touch Tohmatsu in 1993. This merger did not go too smoothly and some partners in

Coopers & Lybrand was formed in 1957 after the merger of the firms Coopers Brothers & Co., Ross Bros & Montgomery, McDonald Curie & Co. and Lybrand. In 1998 Price Waterhouse and Coopers & Lybrand merged to form PricewaterhouseCoopers.